MEP Richard Sulik on Trump, Migrant Crisis and Islam. What are Europe’s Challenges and how to tackle them? – by Frank Markovic: Richard Sulik is a leader of Slovakia’s liberal party SaS (strana Sloboda a Solidarita). He is a former President of the country’s Parliament and …

… since 2014 he has been elected a Member of the European Parliament. He is affiliated with and sits within the European Conservatives and Reformists faction. As leader of Slovakia’s opposition he is both active at the national and EU level. Before he became a politician himself, Richard Sulik was an entrepreneur who, among other things, helped Slovakia’s Ministry of Finance introduce the necessary and successful tax reforms in the early 2000s. He is known for his honesty and firm positions on topics such as the EU, Eurozone, Islam and migrant crisis. We sat down with him in his Brussels office to discuss some of these pertinent issues.

Starting off with the most topical issue that has lately dominated the news cycles: Donald Trump has won the presidential elections in the US. What do you think this will mean for the EU?

First of all, I hope this will finally bring the war in Syria to an end. This would have major ramifications for Europe because the war is at the epicentre of the causes of the migrant crisis. As far as the US goes, we can expect Trump to improve the business environment by, for example, doing away with some of the bank regulation. But Trump is, on the whole, rather difficult to read at the moment. We don’t yet know enough about him. His powers will not be unlimited either; he will be checked by the Congress. We just need to wait and see but as far as NATO is concerned, as I know there have been some concerns raised here, we shouldn’t get too surprised by Trump’s suggestions that members honour their commitments and pay their fair share when it comes to their defence budgets.

You mentioned Syria. The conflict in Syria is inextricably linked with the migrant and refugee crisis. What do you think the EU’s responsibility is when it comes to the crisis? Where do the limits lie?

The limits are demarcated, quite simply, by the EU’s external borders. Of course we have a humanitarian responsibility to help refugees fleeing war zones but to help them we don’t need to move them all here. Syria is the EU’s biggest foreign policy challenge and it mustn’t be overlooked. The end of the war will stop the flows of the migrants and refugees to Europe.

Speaking of solutions; what do you think the EU should do primarily to deal with the crisis?

There are a number of solutions at hand. Above anything else, the EU needs to seal off its external borders and be able to assess people’s asylum claims before they cross into the EU. We have been making this case for over a year and a half and I’m pleased to see that politicians in Europe, among those most recently the German interior minister, are finally beginning to agree with us. Secondly,  the EU should try to stabilise the situation in the countries of origin of these refugees. For instance, it was a mistake to bomb Libya or arm rebels in Syria.

Slovakia is currently presiding over the EU Council. What do you think its role can be to forge these solutions? And to add to that, as an MEP and leader of Slovakia’s opposition, what role can you play?

As for the Presidency: there isn’t much leverage. Presidencies are, for the most part, just marketing. If we didn’t have the institute of presidencies no one would notice. Could you tell me, off the top of your head, which country presided over the EU last year this time? As for my own role, as an MEP my primary concern is to vote. That’s my role. And I do that in line with my conscience and the manifesto on which I ran in 2014. I’m still just only one of the 751 MEPs so there are limits as to what I can achieve. 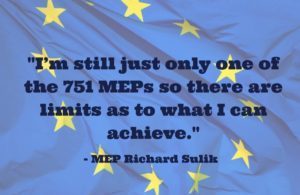 Earlier you mentioned the German Interior minister Thomas de Maiziere  as one of the mainstream politicians who have come closer to agreeing with you on the migrant crisis; what do you think it will take for your ideas to become more mainstream?

Politicians often need to be cornered into taking the right decisions these days. It is often and half-jokingly said that they opt for reasonable solutions only after they have run out of all others, as a last resort. The same applies to closing off the EU’s external borders; it took a while for them to realise there was no other way around it. My role is to keep promoting these solutions – as a politician, as an MEP. And I think it yields results too! I believe, having previously raised some of these issues, that I have contributed somewhat to the change of heart of the German interior minister [Richard Sulik is a frequent guest on German and Austrian TV talk shows on the issues relating to the migrant crisis].

Having defined the solutions, how would you identify the reasons for the migrant crisis?

First of all, bombing of Libya, Syria and the Iraq war all contributed to creating this problem. Second of all, I would say the EU is incapable of dealing with the crisis because it has abandoned its own rules. As a case in point; take the European Commission and its decision to open an infringement procedure against Greece in spring 2010 because it was failing to sufficiently guard the Schengen border. Fast forward 6 years and the result is that nothing has changed. We can’t be surprised then that the EU is not coping well. And last but not least, one of the reasons is the open door policy of Angela Merkel who unilaterally and with a stroke of a pen invited unprecedented numbers of migrants in.

The argument that is often offered at this point is that Angela Merkel is the one who stepped in when no one else was prepared to do so; that she was also the one who negotiated the EU-Turkey deal on migrants, which, as some say, led to stemming the flows of migrants via the so-called Balkan route…

…which is not true! The flows were not stopped because of Merkel’s agreement with Turkey but because Macedonia decided to close its borders with Greece. And it also remains to be seen what will happen with the EU-Turkey deal which may be torn up by Ankara soon anyway. Relations with Erdogan are at the all-time low. Turkey wants to re-introduce capital punishment, the country persecutes political opposition… I’m not sure how many more concessions Mrs. Merkel is prepared to make. Angela Merkel does not deserve praise for what she’s done. Besides, her decisions have been a disaster for Germany.

In what way precisely has the crisis become disastrous?

There are enormous social and political consequences. First of all, it costs a lot of money; suddenly the social system is expected to help hundreds of thousands of new people. This will inevitably lead to lower living standards. And secondly, it affects Germany’s security. There are many negative consequences that Germany will be struggling with for many, many years to come.

Do you expect some of these problems to spill over to other countries, such as Slovakia? After all, the EU works on the principle of a common space, market, we have free movement of people…

Currently migrants and refugees do not have intentions to come to Slovakia but in a hypothetical case, where the migrants start crossing into Slovakia then the question on our mind should be whether we should also close our borders. Our society would not be able to cope with such great numbers of people coming. As for the issue of security; for the time being the threat is low because there are currently few or no migrants in Central Europe. But to protect ourselves from a hypothetical threat, we should continue our opposition to accepting migrants.

…I’ve asked this question because you are known as someone who has his reservations when it comes to Islam and its role in Europe.

It is rather unlikely that Europe has been flooded with hundreds of fresh terrorists as a result of the migrant crisis – or rather, not more than before when the border was equally permeable. I am currently more concerned about the social situation that can have a security element to it too – think of the incident in Cologne at the New Year’s Eve. For me, Islam as an ideology is not compatible with our culture. There is no such thing as moderate Islam. What does exist, though, is a moderate Muslim. Many Muslims are moderate. We should be concerned about integration of people into our society which is rather difficult if you have a big influx of migrants coming at once. It is mass migration, not individuals that I am against. We just simply cannot help all people in need. Globally, there are tens of millions of those who would like to live here.

What comes to your mind when one says ‘European Union’? What does it mean to you?

A good idea at the beginning but it has gone downhill in its implementation and realisation. The EU spends too much time dealing with unimportant issues and it does not respect its own rules, especially the principle of subsidiarity. I am not saying Slovakia should leave the EU. What I am saying is that the EU needs a massive reform which would consist of a return of competences to the Member States. We also need to reconsider and do away with a great amount of regulations currently in place so that the world will be once again a bit freer. 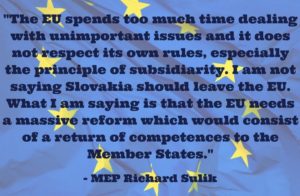 In light of what you have just said, what is Slovakia’s role in the EU?

Slovakia is a small country. It accounts for about 1% of the EU. That is not much but it can still use its voice to raise these concerns and propose solutions. The role of Slovakia is to fight for better Europe and this is something that I will be doing too.

To wrap up the interview, I wanted to ask you about Slovakia’s role in the region of Central Europe. Recently, especially when it came to the migrant crisis, Slovakia has relied more on cooperation with its neighbours, notably the Visegrad countries. Do you think this benefits the country?

Slovakia should take more advantage of the cooperation in the Visegrad group. You can think of the group as an amplifier of the countries’ interests and power. It is a lot easier for Slovakia or any other V4 country for that matter to achieve anything at the EU level with the backing of other three countries.